- April 04, 2020
By Jay Joseph, Psy.D. Awais Aftab’s arguments in his 3/21/2020 post “ Defending Aggregate Genetic Effects in Psychiatric Disorders ” are based largely on his claim that the “high genetic heritability of schizophrenia” and other major psychiatric disorders “has been pretty consistently reported in [the] literature.” Indeed it has, but the “literature” could still be wrong, especially when it is based on the acceptance of false assumptions, and on textbook and other authoritative authors’ frequent failure to critically analyze (or even read closely ) the original “landmark” studies they cite. Not to mention that, as a pair of critics wrote, “ The term ‘heritability,’ as it is used today in human behavioral genetics, is one of the most misleading in the history of science.” (See my description of the “heritability fallacy ” HERE .) Aftab then asked, in relation to Duncan Double’s 3/20/2020 commentary “ The Causes of Psychiatric Illness ,” whether Double can “cite even one good
Post a Comment
Read more

The Fallacy of Estimating "Heritability" in Medicine and the Behavioral Sciences

- April 04, 2021
By Jay Joseph. Psy.D (Adapted from a 3/13/2021 twitter post  https://twitter.com/jayjoseph22/status/1370785425955065860 ) 1/ Critics argue that “heritability” is a misunderstood and misused concept, and that “heritability estimates,” which range from 0% to 100% (0.0 to 1.0), do not tell us “how much” genes contribute to human behavioral differences, or how “fixed” human behavior is. 2/ Using the example of the disease favism (Glucose-6-phosphate dehydrogenase deficiency), I illustrate the fallacy of using heritability estimates to assess “how much” genes influence behavior (“IQ,” “personality,” psychiatric conditions, and so on).   3/ Favism is caused by an inherited deficiency of glucose-6-phosphate. The predisposing gene is located on the X chromosome. When the carrier eats fava (broad) beans or inhales fava bean pollen, favism appears. The disease is marked by the development of hemolytic anemia. 4/ In other words, “beans and genes” are both necessary for favism to appear. I
Post a Comment
Read more

- August 09, 2020
Summary and Link to the Main Article It’s Time to Radically Reevaluate “Reared-Apart” (Separated) Twin Studies   By Jay Joseph, Psy.D. August 9th, 2020 (Link to the full-article pdf HERE ) The “validity of twin studies” question is very important because these studies supply the main “scientific” evidence in support of the “nature” (genetic) side of the long-running “nature-nurture” debate. The question of whether genes or environments are the main cause of human behavioral differences has profound implications for social relations and political policy decisions.  In a previous article I summarized the critique of “twin method” studies, which use reared-together twins. I argued that the main assumption these studies are based on is false, and I concluded that the twin method should be abandoned as a tool for the detection of genetic influences on behavior. In the present article I summarize and add to the main arguments that I and other critics have made against gen
Post a Comment
Read more 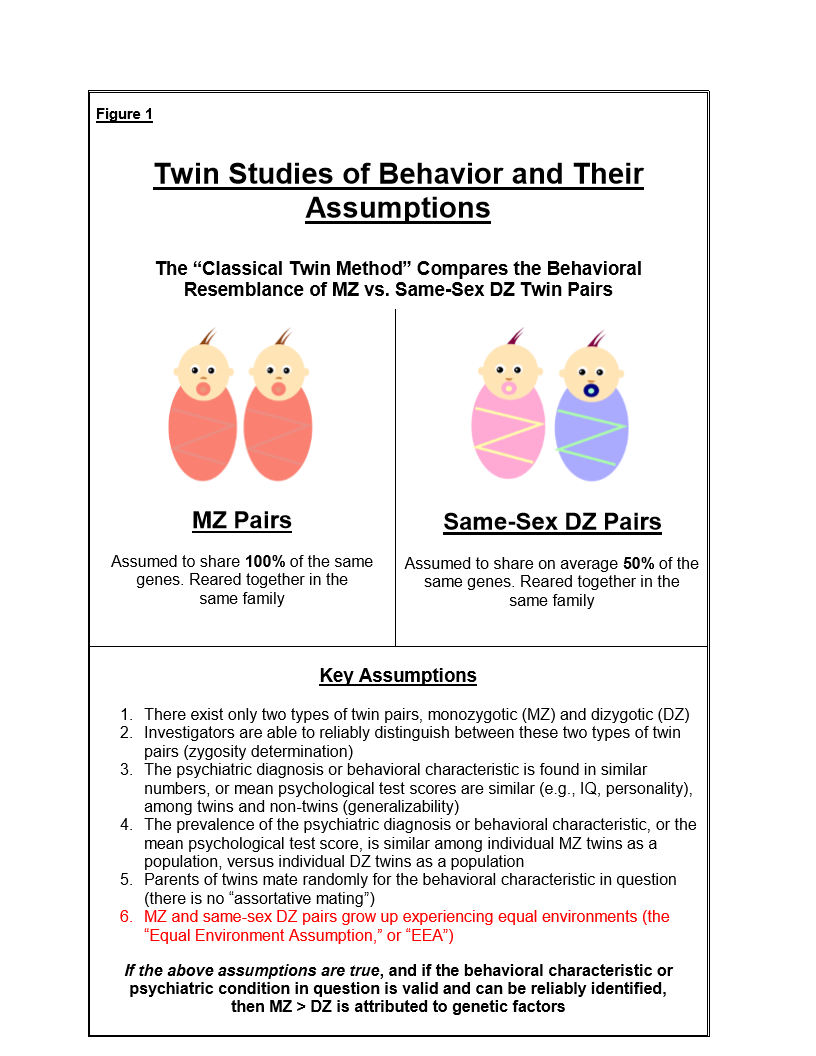 Note: Many more articles on twin research and behavioral genetics can be found at https://www.madinamerica.com/author/jjoseph/ .  My 2020 analysis of reared-apart twin studies can be found HERE (First revision 8/17/2020. Second revision 12/23/2020, based on small stylistic changes, and adding a new introductory paragraph and a paragraph about a 2018 study by Segal and colleagues) By Jay Joseph, Psy.D. In this article I will argue that studies using the "classical twin method" should be abandoned in the social and behavioral sciences. I will attempt to show that the main assumption these studies are based on is false — an argument I have developed in books, peer-reviewed articles , and online articles since 1998 .  Twin studies supply the "scientific evidence" most often cited in support of the claim that human behavioral differences are strongly influenced by heredity. Yet genetic interpretations of twin studies of behavior, including areas such as I
Post a Comment
Read more
More posts

The Gene Illusion in Behavioral Research

The Gene Illusion in Behavioral Research
Jay Joseph, Psy.D. is a clinical psychologist practicing in the San Francisco Bay Area. He is the author of four books, most recently "The Trouble with Twin Studies: A Reassessment of Twin Research in the Social and Behavioral Sciences" (2015), and "Schizophrenia and Genetics: The End of an Illusion" (2017). Many additional articles can be found at his blog “The Gene Illusion” at the Mad in America website. A complete list of his publications can be found at his website http://jayjoseph.net/publications